Forgotten Planes has been published as a book of the same name, and it is available from the Museum of the Southwest in Midland (email mward@museumsw.org to order). The collection has been permanently installed in the offices of Tim Leach, who commissioned the series. He is CEO of Concho Resources, an oil exploration company in Midland, Texas.

My friend Henk Van Assen, who heads the undergraduate graphic design program at Yale, has designed the book.

The book is also available at Amazon.

Mark Smith, past co-owner of Flatbed Press in Austin, TX, wrote this in the book:

"A musical metaphor fits Pritzker's works, but so does an architectural one, for he builds very sturdy compositions. A sculptural metaphor works too, for his forms have mass and monumentality. So does a poetic one, for his works are nothing if not poetic. But my preferred metaphor for this artist's creations is an alchemical one. True alchemists go beyond the impossible chemistry of turning lead into gold; they press toward nothing less than the ultimate enlightenment of humankind. That may sound overblown in the context of our present culture, but historically that was the goal of a philosophical alchemist. In alchemy and other occult systems, this is known as "The Work."

"Pritzker transforms the most base of objects—a bull, an oil tank, a steel pipe—into something visually sublime, but a good poet like Billy Collins can also do that. It takes an advanced alchemist to do what Pritzker does. He draws the outer world in through his lens and into the laboratory of his camera, and there he heats it with the flame of his imagination. His enterprise is at once both gentle and profoundly aggressive, in that he transforms his subject into something else, something that has an ineffable power to levitate our spirit. That is why looking at his images can shock and inspire us; we have never before seen anything like them." 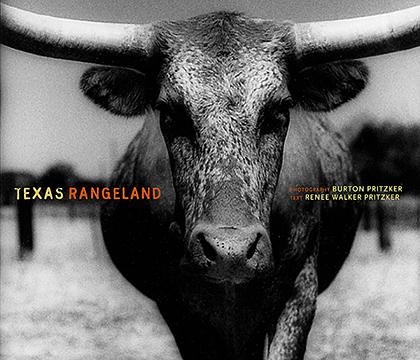 Texas Rangeland is work that was published in a book, titled Texas Rangeland, by University of Texas Press. The series consists of 90-100 images of many of the animals that inhabit the rangeland of Texas (cattle, horses, sheep and goats). However, the Press limited the publication to 62 photos of bulls, cows and steers. The fact that the Texas Longhorn is the University's symbol could have something to do with it. The book has sold out and is out of print. There might be a few copies at Photoeye and Amazon.com and I have some copies that I reserve as gifts for collectors that buy my prints.

It is great that the UT Press responded to some of these images. Many of them are so abstract that they look like landscapes. Abstract "Cow Landscapes" as somebody said. Or maybe even aerial shots. But nevertheless, it is very satisfying that they understood and thought the work to be marketable. The book is a blend of literal and abstract. Roy Flukinger, Curator of Photography and Film at the Harry Ransom Center at the University of Texas, has written an introduction placing my work into the context of art and history in general.